“Cappadocia Tapestry” is a photographic wall hanging which incorporates embroidery. It is one of the four works comprising “Mithraeum 99,” a site-specific installation in the crypt of the Church of the Intercession at Broadway and 155th Street, New York City.

Cappodocia is located in eastern Anatolia, in the center of what is today Turkey. The early Christians, fleeing persecution from the Romans during the 2nd century, sought refuge in Cappadocia where, in addition to above-ground dwellings, churches and monasteries, they began to build massive underground cities for protection against invaders. Over the centuries, these cave-cities grew in size and number to the extent that today 36 cities in Cappadocia have been preserved as tourist destinations.

I first visited Cappadocia in 2010. The region’s effect on me was overpowering. These underground cities evoke the glories and horrors of the past in a way that few surviving remnants of the ancient past do.

Rather than the underground cities themselves, the photographs in the tapestry depict their surroundings, with the center image capturing the view outward toward the sky and the outside world from which the Christians had been forced to hide. The embroidery –an abstraction of the patterns of stained-glass windows– evokes the religious underpinnings and controversies that necessitated the creation of these cities beginning almost 2,000 years ago.

“Cappodocia Tapestry” is part of my continuing series entitled “Searching for Pierre Loti.” Inspired by the life and journeys of Pierre Loti*, the series captures my perceptions and feelings in the course of traveling to and through the many spots on the globe I’ve been privileged to have lived in or visited. 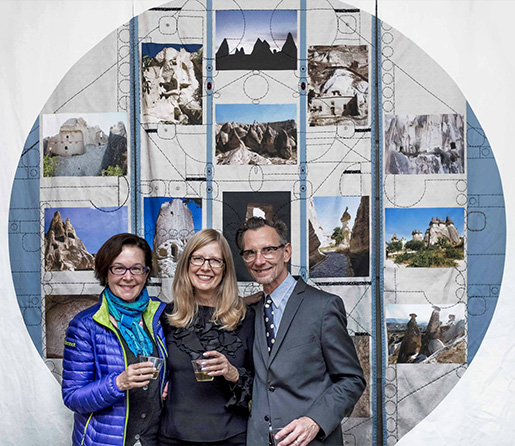