ExtremiDigiti is latin for “Extreme Fingers”

This series is from 1997.
I chose to name each of the photographs in latin after various insects, as the nails themselves take on a creature like quality, like an insect from outer space, Godzilla or sea anemones.

Fingernails is a series of photographs –miniature black-and -whites, as well as large-scale color photographs of women’s decorative fingernail extensions.

Fingernail extensions make it possible to extend the nail to such a degree that elaborate art can be applied to the nail’s surface so that the nail becomes a form of adornment armor. Nails can be decorated in an incredibly wide range of styles. We see for example, images of animals and birds, landscapes, hard-edged graphics and abstractions; even jewels can be implanted.

The work attempts to give expression to the “feminine” soul by deploying strategies common to commercial photography. By focusing on a particular commodity found in a woman’s boudoir after it has undergone the personal imprint of use, the work reflects how consumer products take on a personality which reflects that of the user.

A woman’s decision to create and then display these “miniature” paintings on her nails is influenced by a variety of economic, social and cultural forces, some of which can be discerned. Strength and vulnerability are also both to be found within these images. 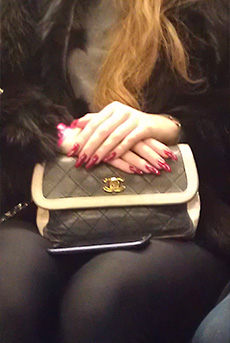