Nostalgia Isn’t What It Used To Be

Nostalgia Isn’t What It Used To Be, happens to be the title of the memoirs by French actress, Simone Signoret, published in 1976.

Signoret’s work spanned a 40-year career and at the height of her fame won the Oscar for Best Actress in the film, “Room at the Top”. Ironically enough, like so much of the past, Signoret has mostly receded into our cultural forgetfulness.

The show is divided into three sections, The Drive-ins, Backseat Views and Movies I’ll Never Make.

With the first two series, I tip my hat to symbols that are rapidly vanishing into the American past; the drive-in movie theater and very large automobiles. The third section is a 6-paneled piece entitled, Betaville Blondes from the Movies I’ll Never Make series, which is both a riff on and homage to yet another French artist, the director, Jean-Luc Godard and his 1965 film, Alphaville.

The images of large screens and cars reflect a culture and an era that first television, then the video store, then Neflix and the Internet have helped to bury, just as a consciousness of the environment and gas prices have helped to bury the types of automobiles you see here.

These images may appear as more cultural artifact from a prehistoric time than they are triggers for the sweet remembrances associated with nostalgia, … in which case nostalgia, once again, isn’t what it used to be. And, thanks to David Lynch and Quentin Tarrantino, among many others, nostalgia for the past has been nudged somewhat from sweet remembrance into a more self-conscious “hip” or “retro” aesthetic.

I am deeply drawn to these remnants of an earlier age and believe they speak of expansiveness, optimism and perhaps innocence. The process of recapturing those feelings in a photographic medium is an aesthetic challenge. 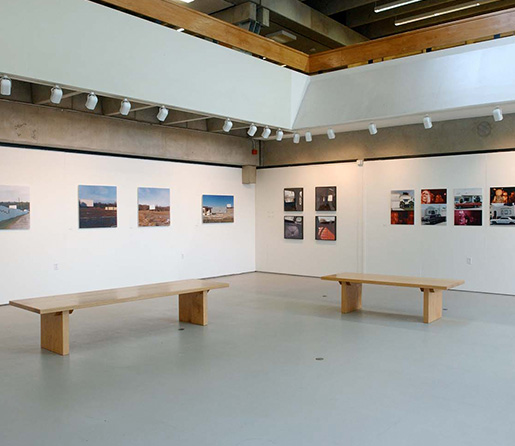 El Cerrito is a section of San Francisco, California.
The photographs were taken in 1990 when I happened to be walking around a particular neighborhood there. I was fascinated by the combination of homes, topiary and cars perfectly placed in the front, almost like a stage set.
These images were also used in a larger photographic series, titled, “Betaville Blondes”, but they stand on their own, as well.