“Parade” is a series of photographs distilled from 8mm home movies shot by my mother in the late 1950’s and early 1960’s.

The original films document two parades: one in Duluth, Minnesota with Hugh O’Brien, television’s Wyatt Earp, and Miss Seaway, a beauty queen, while the other in Pasadena California, is the annual Rose Parade with floats of Japanese gardens and Chinese pavilions.

Seductively embedded in the films’ textures and aged colors are visual abstractions, cultural stereotypes and social politics –from the local beauty queen in her frothy white dress to the slick politician waving to the crowd.

This series is about memory. As a young girl, I was present when these films were shot. They are records of the literal and metaphorical passing parade. The grainy quality of the original films and the effect of the pixel (resulting from their transfer to video), evoke the vague and foggy feelings of childhood, as well as the uneasy fading and dissolving of memories in adulthood. Adding personal resonance to the project was the Alzheimer’s my mother suffered in her final years.

“Greene’s subjects –various beauty queens in cars, floats or wagons– look like a grainy, discolored memory. One cannot help being reminded of some idealist’s dream: a postwar woman who sees a world filled with pleasure and promise.”—D. Dominick Lombardi, The New York Times. 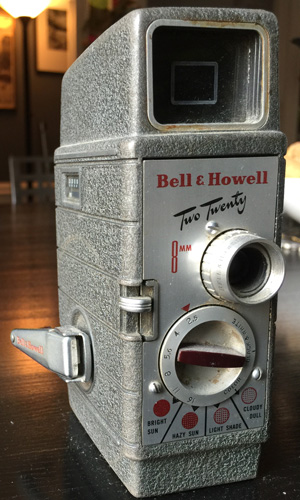 My mother used this 1950’s Bell & Howell 8mm camera to “capture” these parades, from Minnesota to California.

I then transferred the film to video, in order to create the artwork for the “Parade” series.